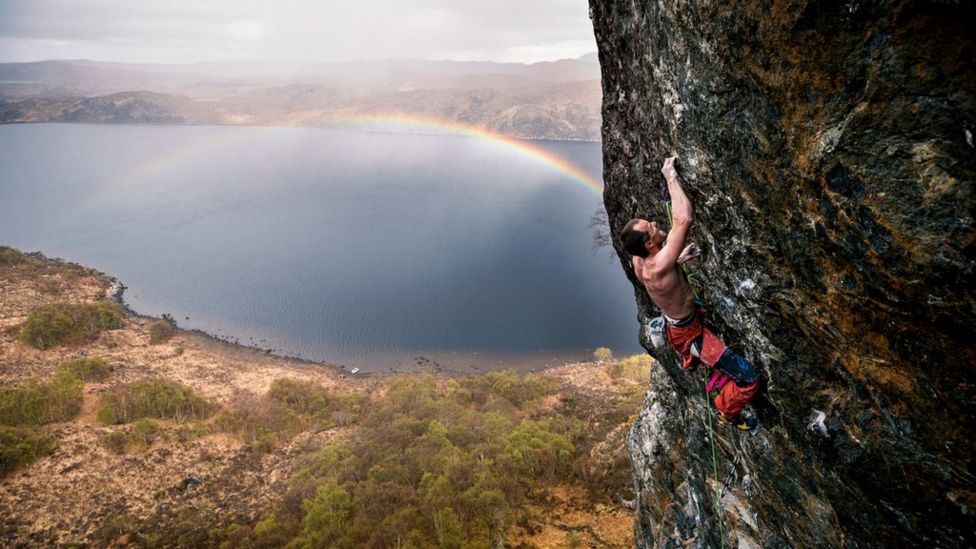 Professional climber Dave MacLeod admits to having an obsession with striking new climbing routes on some of the toughest rock faces in Scotland.

He has established climbs up sea cliffs in the Western Isles and mountains in the Highlands, including on Ben Nevis, Britain’s highest peak.

Ahead of the Kendal Mountain Festival’s premiere of his new film, called Undiscovered: A Journey into the Remotest Corners of Scotland, which features fellow climbers Natalie Berry and Masa Sakano, MacLeod has spoken of the highs and lows of the past 25 years.

His love for rock climbing started when he was a teenager on a bike ride from his home in Scotland’s biggest city.

“I would say the moment I got hooked on the idea of climbing was when I first cycled out of Glasgow and saw a full horizon of mountains covered in snow,” says Mr MacLeod.

“They looked close and accessible, which they were, and seeing all the snow on them on a sunny April day made the idea of going up them seem really appealing.”

But his first rock climb was at Dumbarton Rock, the remains of a long-extinct volcano at Dumbarton just outside Glasgow.

MacLeod enjoyed the freedom of being able to clamber around the rocks without the need of any equipment or permission. From that day the young MacLeod sought out other places to go climbing.

“I felt really at ease and happy on crags and mountains as an otherwise shy and timid teenager,” he says.

After leaving school, MacLeod worked as a postman to make enough money to buy climbing gear and pay for sessions at local climbing walls.

He wrote for climbing magazines while at university, before later going on to write climbing guidebooks, speaking at mountain festivals, coaching before securing some income from sponsorships.

The 41-year-old is today based in Lochaber in the west Highlands, where he lives with his wife Claire and their daughter Freida.

He lives close to where he has done much of his climbing in Scotland – Ben Nevis.

“I don’t really think of routes I’ve done as things I’m proud of, but if I had to pick one, it might be a new route I did on Ben Nevis called Echo Wall,” he says.

“It’s a pretty hard and really dangerous climb and it took a serious commitment over a couple of years to prepare myself for it physically and mentally.”

MacLeod has written two books on training for climbing and regularly blogs on the subject, drawing on his own experiences including serious injuries.

“Some were training injuries which were probably avoidable with better planning of my training, recovery and diet,” he says.

“I’ve also had some bad injuries from falling to the ground from a reasonable height,” he adds.

“I was accidentally lowered off the end of a rope by a climbing partner in 2012 and broke my ankle really badly. This was the worst injury I’ve had and even after multiple surgeries I worried I might not be able to continue climbing hard.”

He adds: “I briefly wondered if I might get on better with a prosthetic foot. I have now recovered well from that injury although my ankles are far from perfect.”

MacLeod is deep in the planning for future projects, most of them involving putting further strain on his ankles and fingertips.

“There is another really hard-looking unclimbed wall on the north face of Ben Nevis. You see it in profile when you drive along ‘The Blar’ road from Corpach into Fort William,” he says.

“It never gets wet from the rain because it’s so overhanging. I’d love to climb it, but it needs a good dry summer.”

He adds: “I have also been developing new routes out in the west Highlands near Loch Morar. There is a glen there which is just covered in unclimbed walls and the rock is very compact with not many holds or cracks.

“I can get there in a couple of hours from my house. Its great to have so many climbing challenges right on the doorstep, but this is why I moved to the Highlands.”