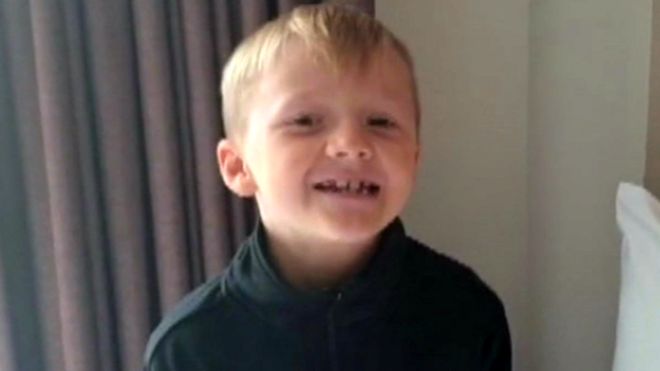 The words of eight-year-old Callum Taylor, who travels from Shetland to Aberdeen for MRI scans, after being diagnosed with epilepsy.

At the moment, more than 600 patients a year do this – at a cost of more than £200,000 to the local health board in travel tickets alone.

An MRI machine costs £1.6m and NHS Shetland says it cannot afford one. So the community is raising funds instead.

Magnetic resonance imaging uses strong magnetic fields and radio waves to produce detailed images of the inside of the body.

It can be used to detect many – sometimes life-threatening – conditions such as cancer, heart defects and internal bleeding.

People living in Shetland have to make the long return trip totalling about 400 miles by plane or ferry to Aberdeen to get a scan.

However, unpredictable weather conditions can cause travel delays and even cancellations at times – and locals claim the situation cannot continue.

Callum has travelled to Royal Aberdeen Children’s Hospital (RACH) six times since July for MRI scans, after being diagnosed with two different types of epilepsy.

His mother, Shona McNab said it can be difficult to keep his spirits up.

She told BBC Scotland’s The Nine: “Sometimes Callum is glad to be in Aberdeen, but he is sometimes a bit emotional.

“We try and play down his hospital appointments so as to not worry him but that can be harder to do if it’s such a big deal.

“It is taking time off work and time out of school – it is kind of hard to play it down”.

Callum’s story is not unique in Shetland.

Six-year-old Etta Hannah was diagnosed with tumours in her brain and spinal cord before she started school last year, after a routine optometry appointment picked up swelling on her optic nerve.

Since then, she has had to travel to the mainland regularly for chemotherapy and MRI scans.

Etta’s mother Jennifer Murray said her daughter has nerve pain in her legs, so she tires very easily in comparison to other six-year-olds.

“I have actually stopped counting the number of times we have had to travel to Aberdeen in the last year because we have gone about sixty flights and some air ambulances because we have a lot of emergencies,” she said.

“People think, it’s only an hour’s flight to get from Sumburgh to Aberdeen, but actually it is about four hours from walking out your house to setting foot in the hospital.

“For Etta when she is so poorly and sometimes when she is chemo-sick or very sore, it is a lot.”

‘Make sure we get there’

She added: “If you miss your slot, they can’t just put you in the next day – it doesn’t work like that. But when Etta’s tumours rely on being monitored regularly, you have to get there so sometimes it means we have to go a couple of days before just to make sure we get there.

“A day trip that is meant to be an overnight turns into two weeks – that happens quite a lot.”

The community began fundraising for the MRI machine on the 70th anniversary of the NHS in July 2018.

Harriet Middleton and fellow “MRI Maakers” knit hats, gloves and accessories and sell them locally and online (“maarkin and yaarkin” is a local term for knitting and chatting).

They put all the money raised towards the Shetland MRI Scanner Appeal, and have so far raised more than £70,000.

Harriet has her own experience travelling to Aberdeen for regular MRI scans.

She said: “I started doing this because I had a cancerous polyp that had to be removed. I had it removed and as a result of that I had to go to Aberdeen once every three months for two years.

“It can be quite tiring and I was very fit an able to do it but it would be a horrible long journey for anybody who wasn’t quite so fit.”

The fundraiser said she thought it was a shame that money had to be found for it – but that Shetlanders were “very, very, very good at raising money and when push comes to shove”.

She added: “We can’t stress strongly enough how important it would be to have it here, in the end I think it could probably be a lifesaver”.

The Scottish government said in a statement: “In 2019-20, NHS Shetland received increased investment of £1.2m, taking total board funding to £50.6m.

“While the Scottish government provides funding for equipment including MRI scanners, NHS Shetland is responsible for its own financial management and NHS Scotland estimated there would only be enough activity for the MRI scanner to be used one day a week”.

At Gilbert Bain Hospital in Lerwick, consultant surgeon Gordon McFarlane believes the scanner would be in use more than that.

He said: “I think it will be used two or three days a week. The list might not be quite as long as they have in Aberdeen, but also having it here and able to be used at least Monday to Friday is going make a big difference.”

NHS Shetland’s interim chief executive Simon Bokor-Ingram said: “We have rising cost pressures so we need to be more efficient in what we do.

“The reality is that up and down the country there are donated assets in every hospital and it is absolutely right that for Shetland, the community has identified this as a potential project to put their efforts in to.

“This is about reinvesting the money that we are not spending on patient travel back into the service”.

January 13, 2020 Arpit Arpit Comments Off on Brunswick and Sea Ray debut a boat loaded with futuristic features at CES